Requests and Challenges - Not By a Long Shot: Part One 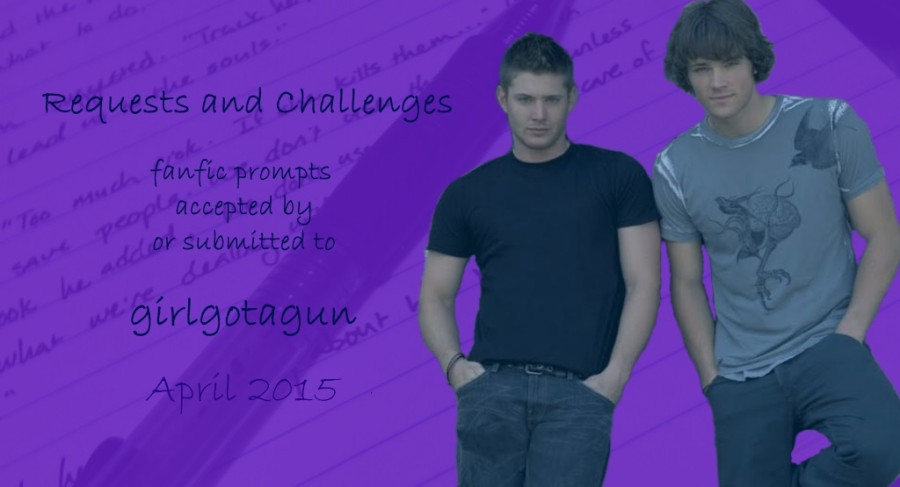 Summary: Sam’s a bit of a slut. Okay, a lot of a slut. But that's okay; that's just how Dean likes him, as long as at the end of the night he—and all the other Alphas he lets knot him—remembers who he really belongs to.

Sam was a good little omega. He knew it by the way Dean growled it in his ear before they tied, his teeth sinking down over the long-scarred bite mark that signaled his claim. He knew it by the way Dean held him tight, anchored him as his body trembled, rough hands running over his heated skin as his hips thrust lazily up into the omega, Sam’s arms straining from the stress of being suspended from the ceiling, the balls of his feet barely touching the ground as the spreader bar bit into his ankles. Knew it in the way Dean rewarded him; knew it at times like this.

He was a good little omega, kneeling on the floor with this feet together, knees spread wide. His shoulders were touching the floor, arms folded under his chest and cheek against the cool hardwood. His ass was raised high in the air, thighs quivering with the strain of holding the position for the last half hour. Dean liked to make him present, to make him hold the position as he relaxed and took in the sight, leaning back in his chair, a lazy smirk playing at his full lips as Sam’s hole quivered and slick leaked slowly out.

More than that, Dean liked to let other Alphas see what a good little omega he was—what a perfect bitch. There were three tonight, and Sam was beginning to think that Dean was only going to let them look. But he should have known better, ’cause Dean was a good Alpha; always kept his promises to his omega.

Sam heard the low rumble of his Alpha’s voice, the words indistinct, before a pair of strong, unfamiliar hands we're gripping his hips, hoisting his ass higher in the air. His breath hitched in anticipation and he bit back a sigh as he felt a thick, calloused finger drift down through the cleft of his ass, dipping into his already-prepared hole, testing the resistance in the muscles and the thick coating of slick on his inner walls in the way a swimmer would check water temperature.

Benny, Sam decided, trying to separate the Alpha’s scent from the others. Castiel was just as gentle-natured, but his hands were smooth. Benny had the hands of a laborer.

The Alpha slid two fingers into him, a low groan that was closer to a growl working its way out of his throat as Sam clenched teasingly around him. “So fucking tight,” he said in that deep voice, soft but powerful. Benny didn't need volume to command attention or obedience. “Can't wait to fuck you, knot you full.”

“Do it.” The words came from Dean, an Alpha speaking for his omega, and Sam resisted the urge to cry out in agreement. He was a good bitch; he didn't speak until he was told to. “He’s gagging for it, Benny. Wants to be fucked hard, filled up by a strange knot as we all watch.” There was a pause. “Don't you, bitch?”

“Yes!” The answer escaped on a choked, relieved whimper. “Yes please, Alpha!” Because Sam was a good omega, a perfect bitch, and he always remembered his manners.

The air was nearly knocked out of him and he had to scamper to regain his position as Benny slammed into him, dragging a surprised, happy cry from the omega as he was suddenly stretched full. He received a harsh slap to his outer thigh in response before Benny was fucking him hard, the sharp slap of skin-on-skin filling the room as he pushed repeatedly through the tight, slick muscles, his cock pressing into the omega’s prostate with each pass.

Sam wasn't sure what to focus on. Every sense was on fire. The smell of Benny, lust and raw power and Alpha was flooding his mind. Under that, the smell of Dean, calm liquid control and the sharp edge of barely-reigned in jealousy—he loved it, Sam knew, loved watching his omega fucked and knotted and filled over and over again, but his instincts still raised objections. And duller, under all of that, were Castiel and Gadreel, heady lust and anticipation, impatience and intrigue as they watched.

Benny’s hands were gripping his hips tight enough to bruise, all pretense of gentleness gone as his hips thrust hard, rocking Sam with each thrust, his cock stretching him full as his knot began to swell. With one particularly brutal thrust, the knot slid past Sam’s rim and caught, and then Sam couldn't hold it in anymore.

He started babbling, begging, egging Benny on. “Oh god, Alpha, yes! Fucking knot me; fill me up. Show me what a good little bitch I am!” The knot was pressing against his prostate, pushing him to the edge as it stretched him, making him feel like the Alpha was about to split him in two.

He tried to catch his breath as Benny gave an experimental tug, confirming that they were tied for the moment. He could hear footsteps approaching them, heard them come to a stop in front of him and the rustle of clothing as the Alpha crouched down, Dean’s scent washing over him.

“Look at me, bitch.” The command was quiet, controlled, and Sam obediently raised his head, his eyes coming up to meet his Alpha’s, holding only for a moment before falling to the man’s lips, lest the eye contact be taken as a challenge, as Sam being a bad omega.

“Was that enough for you? Was that giant knot enough to fill you up; get your tight little hole sloppy enough? You completely fucked-out already?” His tone made it clear what answer he wanted, and Sam shook his head. Dean reached out, running his thumb over the omega’s bite-swollen lips. “Good boy. I think I'm gonna let Gadreel fuck your face next. While he's doing that, I'm gonna have Cas work in next to Benny. Stretch you out nice and wide around them both so he can fuck you even while you're still tied.”

Sam sighed, leaning into his Alpha’s touch, his eyes sliding shut as the picture Dean was painting with his words brought forth a new rush of hot arousal, coaxing out a searing gush of fresh slick from around Benny’s knot.

Dean smirked, his hand rubbing gently at the back of the omega’s neck as his thumb traced over the claim mark between his throat and shoulder. “Good boy.”

He stood up, heading back to his chair to watch as Gadreel knelt down in his place in front of Sam. The Alpha’s thick cock was already hard, straining and curving up towards his stomach. Sam’s mouth watered as he took in the sight, and he opened his mouth wide, relaxing his jaw as the Alpha’s hand twisted in his hair and yanked him forward, shoving his cock down Sam’s throat in one quick motion. Sam’s rim tugged against Benny’s knot as he was pulled forward, the sudden, sharp pain reminding him how full he was, how completely and thoroughly owned, and he groaned as he focused on relaxing his throat around the wide dick that was filling it. Gadreel gave him only a moment to adjust before he was fucking his face in earnest, pulling back until only the head remained between Sam’s lips and then snapping his hips forward, bringing Sam’s nose flush with his pubic hair. The omega swallowed desperately around him, focusing on breathing through his nose as his senses were overwhelmed with the raw, basal scent of Alpha.

He had barely adjusted when he felt soft hands at his backside, a smooth finger working it's way slowly into him alongside Benny. He let out a low moan, drawing a strangled curse from Gadreel as the omega’s throat vibrated around his dick. Sam spread his legs wider, trying to relax as Cas worked in a second finger, pulling and stretching his rim.

It felt simultaneously like no time at all and far too long, and then Cas was pushing into him slowly, pausing with every inch to let the omega adjust. Tears burned at Sam’s eyes; it was too much, he was going to tear, was going to split open. He couldn't do it.

And then Dean spoke, his voice quiet, soothing. “Doing so good, baby. Such a good little bitch.” His Alpha inhaled sharply. “You should see what you look like, stretched out with two cocks inside of you and one fucking your face. Such a pretty little cockslut. My pretty little cockslut. Gonna let them wreck you; get your hole all sloppy and stretched out. Then before they leave, I'm gonna fuck you; gonna claim you like I did years ago while they watch. Remind you that no matter how many knots you take in that gaping, greedy sluthole of yours, no one will ever make you feel like I do.”

Sam whimpered at the words, relaxing into the painful stretch and pressure as Cas began to move, his knot quickly beginning to swell from the tight heat of Sam’s over-stretched, abused hole. He pushed the knot inside and Sam screamed around Gadreel’s cock as the knot grew, stretching him too far, too full.

And then it was over, Cas tied now next to Benny inside of him, and the pressure on his prostate was too much, despite the pain, making him come with a scream as Cas shot off deep inside of him. He could feel himself leaking, overflowing, and knew Gadreel could see it as the Alpha thrust harder in response.

Gadreel’s thrusts were becoming more erratic now, the Alpha staying deeper in his throat, no longer withdrawing completely. And god help him, Sam did want it. Wanted to be a good omega, a perfect bitch, fucked full and tied at both ends.

“Do it,” Dean commanded in a low voice, and then Gadreel was coming, his knot expanding rapidly as Sam worked to keep his teeth covered, relaxing his jaw completely.

He heard a low growl of approval from Dean as he took in the sight.